A few weeks ago, Dan and I treated ourselves to a screening of Miami Connection at our local Alamo Drafthouse in Brooklyn. We’d seen it before in our friend Bill’s apartment, but experiencing it on the big screen with a devoted audience encapsulated what makes this film so charming. Co-written and directed by Korean-born Tae Kwon Do instructor, Grandmaster Y.K. Kim, this movie’s hopeless ineptitude and failed execution are elevated by Kim’s optimistic naiveté, which pushes the plot along with relentless enthusiasm. Whether it’s Kim (who cast himself as the main character) traipsing around as “just another fifty-year-old college kid” with his decades-younger friends, or the inane plot loosely centered around their cheesy New Wave band, Dragon Sound, or the film’s misdirecting title (it’s set almost solely in Orlando), this movie’s horrible execution is given an amiable spin thanks to Y.K. Kim’s presence. The result is so, so terrible, but you’re rooting for it anyway.

I mean, just listen to this dope track by Dragon Sound:

If that clip doesn’t convince you this movie is worth your time, nothing will. (And you fucking suck and probably enjoy drinking Campari. [Fuck You.])  The weirdly long intro, the out of sync clapping, the stilted delivery from that earring-clad dude—Kim’s sick guitar skills!

This shit is an 80’s cheese maelstrom!

The movie is centered around the friendship of the members of Dragon Sound, who don’t only play music together—they also live in an inspirational poster filled house, practice Tae Kwon Do, and brawl vaguely threatening gangsters together. They quickly become embroiled in multiple situations in which they must utilize their mastery of Tae Kwon Do to defend themselves, including, a jealous brother, a jealous rival band, and saving a kidnapped friend. One poorly choreographed action sequence leads to another until, finally, they come head to head with coke dealing ninjas from Miami. But it seems like, more than the punching and kicking, Y.K. wants to convince us that the power of a Tae Kwon Do infused friendship is the key to a fulfilling life. The relationship between these five dudes is explored in scenes that are supposed to be touching, but end up being hilarious.

Much of that is because—as you might have noticed—these guys aren’t actors. They’re his fucking Tae Kwon Do students. Even more hilarious, the script is eschewed for improvisational bits and unedited, static long shots, all of which forces the talent to fill dead air by saying the same lines over and over. Add in some odd sounding ADR and presto! You got a spicy meatball:

You couldn’t film something that inept if you tried, I promise you. This movie is a perfect shit-storm of ineptitude.

The film’s final moments feature Kim and company cutting up ninjas with swords in a series of brutal murders, only to flash the following piece of wisdom on screen: 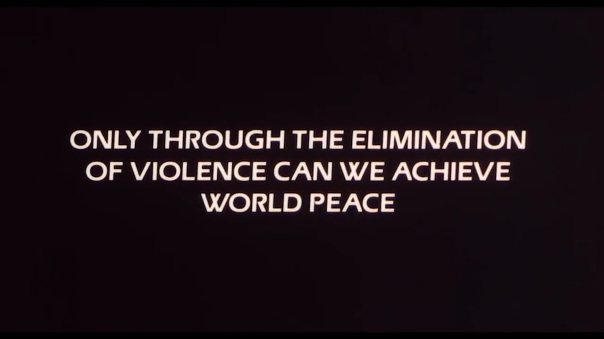 A little paradoxical, no?

But the crowning achievement of this film is a side plot of a bandmate’s search for his father. Kim and co. went for melodrama with this shit and the dude’s acting chops and the stilted dialogue can’t cut it. It’s the funniest shit ever.

Does he ever find his father?

What sets this movie apart from the other so-bad-they’re-good gems on our “Search for the Best Worst” list is the story that took place behind the scenes. It’s not the result of a professional trying to make artsy statements in a shitty horror film (a la Troll 2), or an independent filmmaker trying to make a sweeping anti-war film with zero budget (a la Birdemic: Shock and Terror), or even a ramshackle film series starring an over the hill star pushing the envelope into the extreme because there was nowhere else to go (a la Death Wish III [we’ll be writing about the latter two soon!]). This was a guy with zero credentials trying to will a movie together with nothing but optimism and elbow grease. And even when it turned out to be fucking garbage, Y.K. Kim’s hopeful confidence died hard.

“I was so excited, and I had no doubt that we would pack every theater and it would be a blockbuster,” he said, reportedly describing his headspace before Miami Connection crashed and burned in theaters and started actual garbage fires around Central Florida (that last bit might be Fake News I just made up). And the dude risked everything to make this thing! He scrounged together nearly a million dollars for the budget by mortgaging his school, taking loans he couldn’t pay back and borrowing money from friends, nearly bankrupting him. It was eventually discovered by Drafhouse Films and the rest is history. I guess Y.K. Kim got his hit film after all, though probably not in the way he intended to.

We have a complex rating system that only Dan can comprehend to rank these things, so I guess we should get to that. Billy, Dan and I watched, wept and the results put it high on the list. Is it enough to be the crowning dumpster fire? We’ll see.