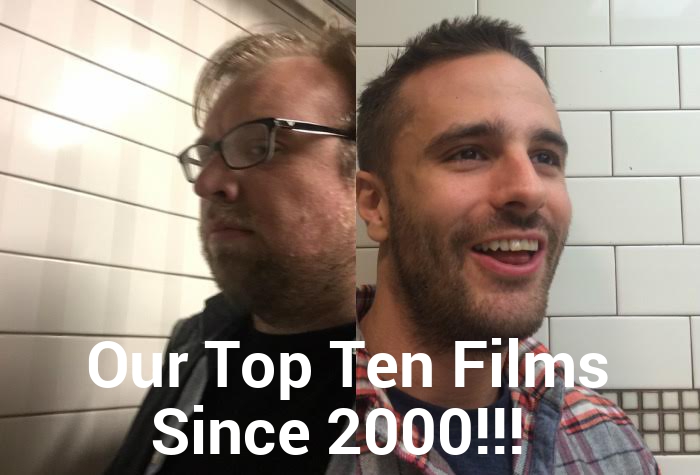 Nate and Dan watch a lot of movies and play a lot of video games together. Film and games are pretty much the only things between us. And booze. Occasionally, we’ll stagger out to a bar with people, I guess. We went to Arkansas for a friend’s wedding. We went to the beach once I think. I’ve helped him, his wife, and his lovable garbage cat put together some of their furniture. We’ve gone to a couple of concerts together maybe? Point is, we’ve known each other for thirteen years and I can’t think of a dozen things we’ve done together outside of the usual fart in to our couch cushions, make jokes that are way too inside (and mostly unfunny), and criticize each other’s insecurities. It’s the pinnacle of a healthy friendship for degenerates. So you may figure that we have a lot of similarities when it comes to the films we love, seeing as we have both managed to tolerate each other for so long, but you wouldn’t be entirely right! Or wrong!

Well, you get the idea. The point of this pointlessness is that although we don’t have completely similar tastes, each and every film on this list has a compelling plot and compelling characters. And that’s it! That’s what a good goddamn movie does. Plot and characters. Everything else is secondary. And when we look at the current landscape of big studio productions, it’s seldom that we’re genuinely intrigued by upcoming releases. Studios don’t take chances like they did in the 70s, 80s, and even the 90s. Seriously, Ghostbusters? How the fuck did that story get a big studio release?!

Movies are becoming less and less about ideas and are more about churning out proven formulas that work. We are living in the age of the reboot and cinematic universes, and it’s fucking nauseating. And although we do both have some adaptations on our lists, the creative thrust of each of our entries has at least SOME guts and originality. Whether or not our favorite films are any good is of course up for debate (jk, fuck off if you don’t like them) but I think it’s fair to say we like films that are smart enough to know how important plot and characters are, and are ballsy enough to take a fucking chance.

Or you could get all amped up about James Cameron doing four more Avatar movies.

One thought on “The Best Films Since 2000: Nate and Dan Compare Their Lists”