Before we were married, my wife and I could never decide on what shows to watch together. We just watch TV for different reasons. While I want to get wrapped up in the world of a good scripted drama like Fargo or Breaking Bad, she wants to relax without all the tension and prefers easy to swallow comedies like Family Guy and Bob’s Burgers. After years of failing to find a show we could enjoy comfortably together, we met in the middle. Where was the middle? A travel/food show with a wacky looking host and a penchant for showing greased up food-porn: Diners, Drive Ins & Dives starring (my man) Guy Fieri.

I can’t explain it, but we inexplicably became real fans of this broke-ass Sammy Hagar; this gaudy dude that oozes cheese from every pore, that actually inked himself permanently with the words “Kulinary Gangster,” that spouts poetic nonsense about butter-filled comfort food had charmed us into liking him with only the slightest twinge of irony. But not everyone feels the same way about our frosted tipped, junk food champion.

Meet Dan: a shit-ass Brooklyn snob who knows “THE REAL BROOKLYN, MAN” with the palate to match. Along with hating Adam Sandler and newer video games, Dan has a Guy Fieri aversion. Maybe it’s the dyed goatee or the bowling shirts. Or maybe it’s that Fieri shamelessly uses his real celebrity friends to promote himself. Or maybe it’s the dude’s obsession with creating disgusting fusion foods and inappropriately named sauces. Whatever it is, Dan has always thumbed his nose at us and our adoration of Flavor Town and its lovable cheese ball (guzzling) mayor. What do you do with someone like that?

Take them to Guy’s American Kitchen in Times Square, that’s what! 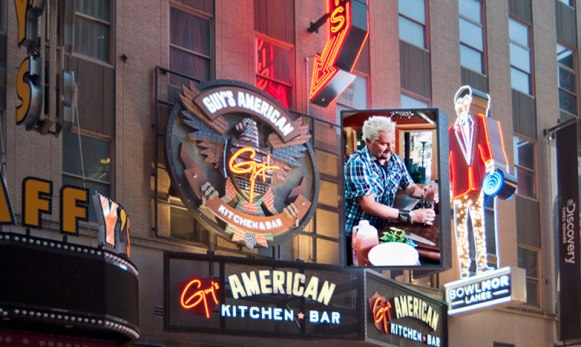 Yea, that Guy’s American Kitchen. The one that inspired the infamous New York Times review that went viral in 2012 and incited a mob of Fieri backlash. There was so much Flavor Town hate that Guy jetted over to NY that night on a redeye for damage control. It’s a destination so infamous that Anthony Bourdain exclaimed its mere existence in the (already gaudy and terrible) Times Square “hurt him.” It’s long been a hot spot for hipsters looking to be ironic and… well, I guess it was our turn. Along with our friend Billy, we gathered a hapless Dan and dragged him into the mayonnaise-filled belly of the beast.

Here is that story in pictures and video:

First Dan had to check out the menu, which includes items like “‘Awesome’ Chicken Tenders” (yes the awesome was in quotes in the menu) and the “Motley Que Ribs”:

This menu contains the descriptor “… a slathering of Donkey Sauce.” If that doesn’t get your palate going nothing will.

We went with the “Crazy Cab Driver,” an eye-opening amalgamation of corn syrup and rum. Guess we’ll have to try the “Crazy Hagar” next time.

Then we dug into some apps. How do those “Dragon Chili Cheese Fries” look Dan?

And then the entrees:

Dan copped out by getting the “Volcano Chicken” (grilled chicken slathered in “Chipotle BBQ” [practically heath food]), but Bill opted for some “real-deal Guy food,” the “Bacon Mac and Cheese Burger” in all its grease-filled glory:

And, of course, plenty of booze to wash it all down with:

Overall it was fine… And not even that funny! This picture of Dan sums it best: 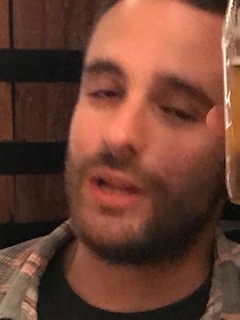 That’s the face of a Guy’s American hero!

2 thoughts on “We Took Dan to Guy’s American Kitchen: A Photo Journal”