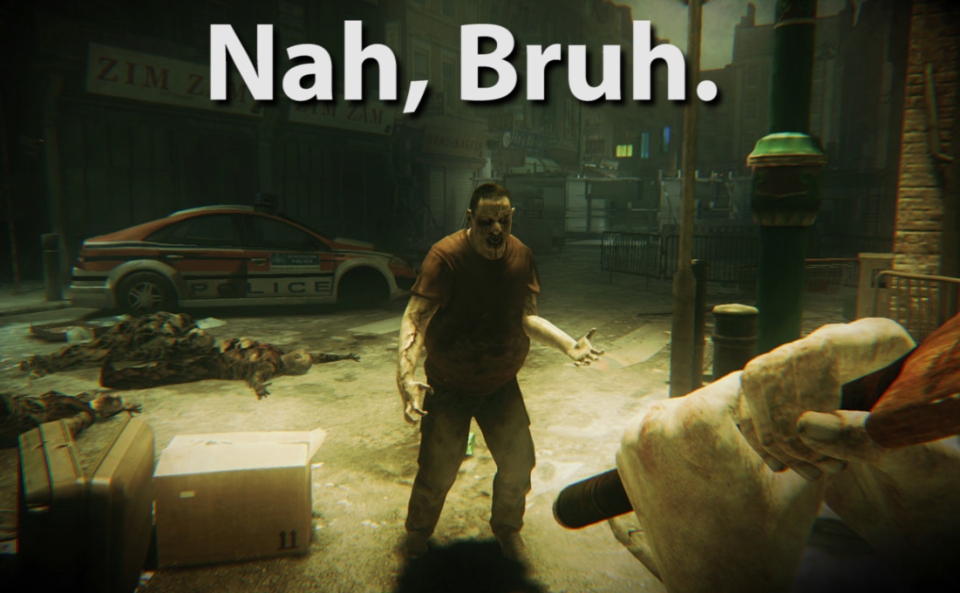 Welcome to Wii U week, where Dan and Nate wax poetic about their favorite failure of a console.

ZombiU isn’t a great game, but it could be the most under appreciated launch title in any console’s history. It came out to lukewarm reviews late in 2012 as it hit shelves alongside the Wii U. Most reviewers cited grievances like poor combat, glitches, and poor graphics, but I felt like it never received the respect it deserved. It’s not the most polished experience, but it could be one of the tensest games out there.

I mean, we’re talking zombie games. What kind of experience represents the zombie genre best? A kill-fest like Dead Rising and Lollipop Chainsaw doesn’t really do it for me—I prefer things more akin to what was really my first foray into zombie slayin’: Resident Evil. Sure you kill a lot of things in that game, but you still had to go cautiously, with a stern eye on resource management. As I wrote nearly two years ago, State of Decay did this really well, and compounded it with high stakes (when a survivor dies—they gone, they long gone). ZombiU has a similar layout, with survivors going until they die a permadeath. Kind of like Dark Souls, your precious resources are lost if you wrack up two survivor deaths in a row. It’s an important addition to the game that ups the tension.

But it’s the integration with the Wii U touch pad that makes this game really shine. At first glance, it can seem like ZombiU uses the Wii U’s unique tablet-like peripheral for displaying maps or sparse mini-games. But it’s so much more!

Here’s how you search for loot with the gamepad:

Your attention is taken away from your surroundings while you attempt to manage your inventory. You are completely vulnerable. And this kind of thing is done throughout the game in multiple ways. Whether sniping through the gamepad, or attempting to mark your surroundings, or prying a piece of wood off a door, these little distractions keep you harried as you attempt to thwart the specter of omnipresent death.

But it’s the map itself that will cause you to catch your breath while playing ZombiU. Press a button on your gamepad’s mini-map and you’ll send out a sonar-like blip, which pings all the enemies in the area. Sometimes, you’re surprised to find, there’s one right behind you.

Despite being re-released on various other platforms, this to me is still a quintessentially Wii U game. The gamepad is necessary to get the full experience and its various ways of taking your attention from the action will keep you sweating as you try to swat your way through London’s zombie-filled streets.