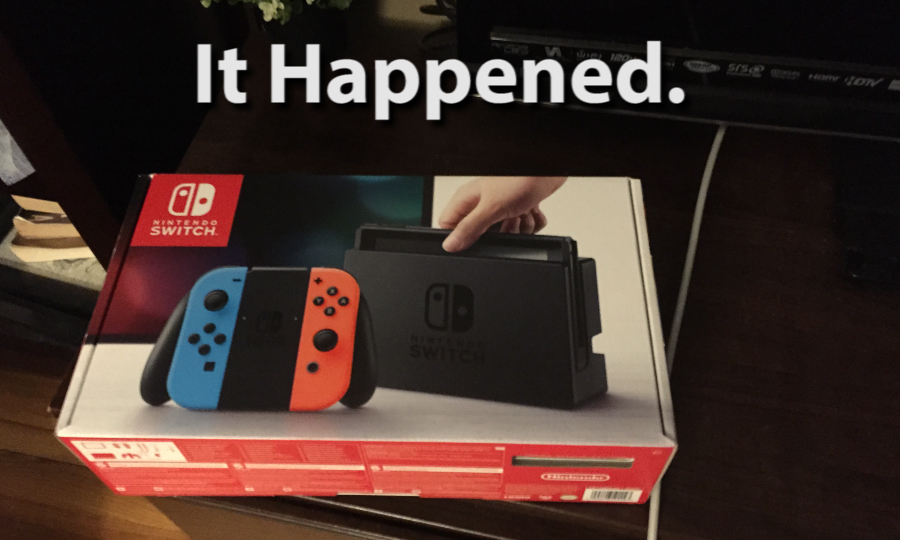 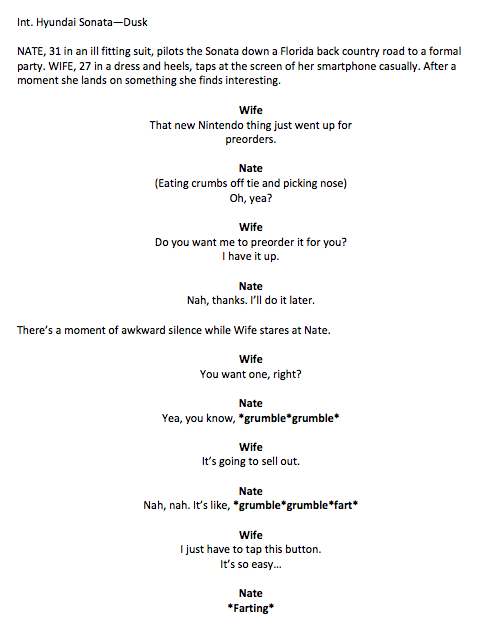 That was an excerpt from a scene that played out between my wife and I in January while we were visiting my parents. Guess what? She was fucking right. Why the fuck did I not just preorder the Nintendo Switch when I had the chance? I’ll never know. Maybe it’s because when you’re married you sometimes just blow off your spouse. Maybe it’s because I wanted to be a proud big boy and do it “ALL ON MY OWNNNNNN.” Maybe it was sun flares. The world will debate this quandary for years to come.

The obvious result of that little scene was that all the fucking preorders sold out and I spent the next day calling retailers on the actual phone like it was the 1800’s exclaiming, “Gosh, you’re out too!!!” I also discovered that I really, really wanted this thing—probably because now it looked as if I would never have it and, by god, this is Americagimmemyshitfuckyou. Disheartened, my only course of action was to wait until day of release when, hopefully, there would be places setting aside some units for a day-of sale.

Fast forward to yesterday: my wife tells me that Best Buy is rolling out available Switch units during a midnight launch, it’s on a first come, first serve basis, and, wouldn’t you know it, I’ll be in the area of one of the Best Buys participating in the launch that night. My plan was forged: I would meet friends, get toasted and roll up to the Best Buy a little bit before midnight, call it a loss and head home.

The following is what happened, in the form of an old prospector’s journal:

I arrived at the Best Buy to the hopeful vision of an empty store front. I walked inside and saw that it was business as usual. Why, patrons browsing Blu-rays, gawking at television displays, asking a member of the “Geek Squad” what an HDMI cord is? This didn’t look like a midnight release of a much anticipated game console at all! I walked up to the clerk and said, “I’ll take a Nintendo Switch, please!” “Back of the line!” they said and directed me back outside the store where a line had formed just around the corner of the entrance. As I made my way past hundreds of people I thought “there’s no way,” “nah,” and “fuck this” in rapid succession. I finally reached the end of the line, a block and a half’s journey from the entrance. A smattering of people fell in behind me. I texted my wife, “It’s packed, I’m out.” “Just stay,” she texted back. I wasn’t about to shirk that godly woman’s sage advice a second time, I stayed put. A proprietor of the Best Buy stalked the queue like an ornery chain gang boss. “Do I have a shot?” I asked. “There’s hope,” he says.

The night gets colder and we haven’t moved. Another employee, a woman draped in the Best Buy’s signature mustard yellow, walks down the line with slips of paper… Tickets they call them. I overhear chatter from the line. It seems having one of these “tickets” is a good sign. She’s getting closer to me, ever so closer. As she walks down the line the tickets in her outstretched hand are dwindling. She reaches me and holds out a ticket. I go to grab it. She rescinds. “All we have left are the colored consoles so…” She’s about to walk away. Goddamnit, wait just a minute! I look her square in the eye, and speak in even tones: “That’s cool.” She hands it to me, and I have a ticket—number 104. “Does this mean I get one?” I ask another employee. “You’re good,” he says, “you’re good.”

The line has moved maybe a half block and the cold gets… colder-er. I’ve made friends with two of my fellow line-mates, a man two people behind me, a journalist, and a young retail salesman in front of me who tells me his name is Dio. Dio doesn’t have a ticket. “I preordered,” he says, causing old wounds to come up and bite me on my ass. The Journalist and I are giddy, clutching our Tickets in crinkled hands. “This means we actually get one?” The Journalist asks rhetorically, conjuring words from the tip of my tongue. “I guess so!?” I answer. “I’ve never done anything like this before,” he says, “I just thought I’d give it a shot.” “It’s my first midnight release, too,” I confide, “This is crazy!” We become fast friends. “We’ll be out of here probably by one thirty,” The Journalist says. I concur. My wife shows up to wait in solidarity and pleasantries are exchanged. Dio, the young preorder-er looks antsy. “I preordered,” he reminds us, “Is there a different line?” Ah, and there it is, the plight of his caste laid bare, forced to wait in a line like the rest of us plebes. Sure enough, within moments a line custodian makes the call, gathering up the privileged and sending them to the front. The Journalist and I exchange an amicable, if slightly jealous, goodbye with Dio as he’s escorted to what would surely be quick access to his new Nintendo console.

The line has barely moved and the cold is closing in, making the crowd more desperate. The Journalist and I have met the man in between us, who works for a startup. Startup Guy lives in the apartment building that shares its massive halls with the Best Buy, and floats in and out of the line like a specter, occasionally warming up in his lobby and getting high. He confides to The Journalist and I that he’s “not really that into the system that much,” but is here because he “lives upstairs and it’s easy.” He wears a beanie with ears on it.

We’re barely any closer to the interior of the Best Buy and we need supplies. My wife, bless her soul, offers to make the trek to a twenty-four-hour market. When she returns Startup Guy, The Journalist and I have formed up with the six people in front of us in a circle. The socializing is friendly, but stained by a twinge of anxiety. “What’s going on?” a young man ahead of us asks. “Why is it taking so long?” I didn’t have an answer, but I hoped we would find out soon. My wife has brought hand warmers and passes them out. We dance from foot to foot to stay warm.

We haven’t moved. The cold is becoming unbearable. The Journalists speaks of giving up, but the crowd talks him down. Most of the people behind us have abandoned the journey. I have to pee. I don’t know if I can make it.

We are finally let inside and I jump with excitement and anticipation that, within a few moments, feeling will return to my extremities. The disgruntled Best Buy employees wave us through with an abruptness that suggests they wished they’d been issued cattle prods. Startup Guy still fades in and out of the line, sometimes in front of me. I give a look, but he assures me he is dedicated to the integrity of the queue. We ride the escalator into the store proper. It won’t be long now; we should be making our purchases shortly. 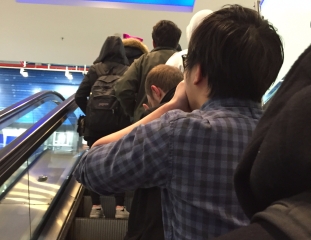 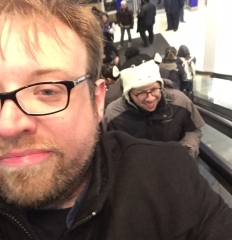 Disaster. The line outside was just the beginning. Here, in the Best Buy, there is more—much more. People sit on the linoleum tiles of the store, heads in hands, like refugees. The artificial warmness of the store’s heaters provide respite, but morale is low. I’m able to relieve myself and so is my wife. When she returns she informs me she’s throwing in the towel. Allison is a hearty woman but even this is too much for her. Startup Guy wanders the aisles of the Best Buy in agitation. Two drunken frat boys heckle us all until security forces them to leave. Is this what I wanted? I don’t even know anymore.

Something must be wrong at the registers. The line doesn’t move in the trickle that would suggest steady transactions, but in short bursts. And the bursts are slow. The Journalist stocks us with chips and Diet Coke. We’re just laughing now, at nothing. Startup Guy has found some of the Best Buy’s plant life, which he delves for grubs. We would have left hours ago but now our investment of time is too steep. We’re laughing and cursing, and laughing again.

I can see the registers. We all sigh in solidarity that we’ve made it this far. The young man in front of me just turns and smiles, excited for what’s to come. Suddenly it’s my turn. I’m queued up, they take my Ticket. I say goodbye to The Journalist and the others. It’s actually happening.

I have my Switch, paid for, with a game and memory card. This was rough, and a midnight release is probably something I won’t attempt again but something tells me I might look back on this night fondly some day. Some day far, far in the future. 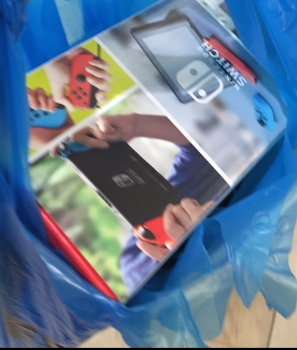